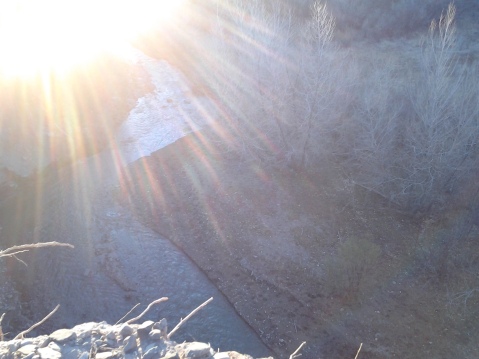 I wish that I was walking the ridges with my native friends (Karl and Rusty) today, but I am not. I begged off as I was neither physically or emotionally fit for the effort today and the remains of last night’s rare storm still threatened to return. The sky is peppered with clouds and the air is rich with moisture while the peaks of the higher mountains are still kissed with snow, it is a lovely day. I might have joined them with some encouragement but I am grateful for the respite, I am still coughing out the remains of the dust which has clogged the air and my lungs until this morning and I need some more time to recover. For the moment it is enough for me to picture them on the mountainside and to recall their shouts through the canyons as they sounded off to each other as the ravens do in flight, I can still hear them. They will come back richer in antlers and I will be fuller of thought, we will all profit from the effort.

I am still trying to learn more from and about my Native compadres. While we are the same in so many ways, being human beings on a shared planet, in others we are inherently different. Our sensibilities may be shared and yet they differ as do night and day, and some things make no sense at all. Where I, as an Anglo person, seek the peace and clarity I have attributed to the Native Tradition of earth and sky so it seems these men I know I have embraced everything but that and they seek solace in distraction instead. Where I walk into the desert to find my peace of mind they turn up the music and guzzle vodka. I seek respite from the world which surrounds me while they embrace the chaos. What, I have to ask, is the sense or the logic of that? It defeats all of my judgment and contradicts everything which has brought me to desire to live and work amongst this community. Where they seem to fail in their quest for knowledge I enhance my own existence with the very essence of their faith and find more solace in the elements of this earth than I do in the company of humanity. They crowd the hillside to share their bottles of whiskey and stumble down the road inebriated to the point of senselessness without ever achieving the comfort they desire. I escape to the desert to replenish my spirit in the utter solitude I find there and when I attend their ceremonial dances I am transported into another realm of existence. When their ceremony ends at midnight and we Anglos are banished from the feast grounds they celebrate the event by getting drunk. The contradiction is so maddening I cannot even define it.

Just days ago I parked my truck alongside the road and climbed the gate to the wilderness. I wandered along a dusty path to a deep arroyo where the river runs winding down the slope through rock and sand. Willows and elms towered from the depths of the draw and the glow of their fresh new leaves was illuminated by the setting sun. Filtered through the branches of the trees the sun’s rays spread like a fan into the canyon and I captured the moment on camera while kneeling on the crumbling edge of the wash. All the while I hoped the sandy wall would not crumble beneath me and send my body plunging to sure death below, buried in dirt and stone. The resulting photo portrays a celestial moment of glowing light through which the curve of the river can be distinguished upon closer inspection. It was Godspeed to say the least, heavenly light at a bare minimum. I saved the picture and texted it to my friend, who was off on another binge, with the caption, “May all be well with you fool, I will leave you alone now.”

Having satisfied my need to risk my life in order to capture and share the moment I wandered further into the desert as the sun slowly made its way to the distant horizon. Its glowing orb faded from white light to a rich golden glow as it settled on the distant mountains on the western horizon and the sky took on an amber tint. As the last light glowed over the mountain peaks I found my knees. I was mesmerized by earth and sky and drawn to the moment with a reverence that required absolute devotion of mind, body and spirit. It was in this instance that the contradiction between my personal practice and faith glared in such a contrast to that of my closest friends. While I found absolute comfort and solace in the complete and utter solitude of the moment and established such a connection with the totality of life itself my Native counterpart was whirling out of control in an alcoholic stupor. Such a terrible injustice seems beyond belief and comprehension to one such as I who has found such comfort in the simplest things which life has to offer. The very set of values it is based upon is something I learned from the study of the native beliefs! Just where is the disconnect and how can it be reattached?

If our ancestors captured the Native peoples and herded them onto the Reservations like cattle into a corral did they also effectively slaughter their spirits? Can such a strong and proud race such as they who lay claim to being the “First People” simply lay down their weapons and allow themselves to be killed off by a far lesser human presence? Of all the tribes in this state the Apaches were the last to be driven into captivity and yet they are as defeated as any other I have met with. Can the force which is so effectively destroying the very atmosphere of this world even poison the spirits of those who inhabited this planet in absolute harmony with the earth and the sky and who held such a reverence for the same? Can the distillation of alcohol, rendered from the very fruits and seeds which nourished generations of people, be the final destructive force? What an injustice that would be! That these men and women willingly allow this to occur is the greatest injustice of all and I must ask each and every one of them how they can permit this to happen. Who then will inhabit this earth when the other peoples have destroyed their own lives and the animals return without the Natives? They will have relinquished their own right to the planet by making such a choice.

I implore that there will be Natives who will read my words and wish to contest them. I hope and pray that they will rise above the defeat and the apathy which has allowed so many of them to relinquish their very spirits and that they can vnquish the demons which were introduced to their lives in order to conquer them. I beseech them to return to the desert and the forest and to call upon the same Gods who have blessed my heart and to find the strengths in themselves to restore all which has been taken from them. I have searched my life through to find the solace and the comfort of earth and sky and have found it no place else except for the solitude of the desert and the forest. I wish for them to do the same. I cannot know their Gods or their spirits but have found something equal to them instead and I can only imagine the power they have for their own people!

I am amazed and saddened by the failings of the people who I have idolized from the early days of my life. I have taken the Native American wisdom and imparted it on my own spirit in order to rise above the fear and the strife which defined my youth on the east coast of this great country. I fled from the masses for the protection of the forest and desert here in New Mexico and sought to heal myself from that pain. I succeeded to a great degree but have also nearly defeated my purpose at the very instant I thought I might have found sanctuary! It is the very failing of these people who I have idolized which has driven me to the brink of my own failure as I have taken on the very sorrow which they have allowed to destroy them. If they cannot survive it how can I possibly manage to do the same?

Survive I will, it is an inherent part of my nature to do so. I have communed with the earth and the sky and found it to be good. I have embraced the warm breast of nature and found the comfort I required. I have found strength and direction in the wind and the sky and all is well with me. I have walked in quiet solitude as the day faded to night and found the answers which I needed for my questions. I will walk forward proudly and in strength and offer my words and my accomplishments to everyone I meet with who might wish to listen. I pray that I am able to share that. I will turn my back, as I already have, to all which is out of harmony with life itself and instead embrace the goodness of the world while hoping that the very people whose wisdom taught me how will also do the same! May all be well with you, my Native friends.